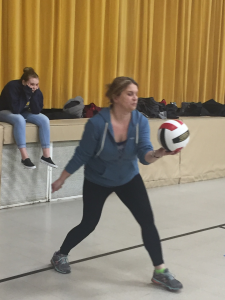 Ida comes to the Aces on temporary assignment to liven up the building.

Her weekly rendition of “Pump up the Jam” is, according to her, “lit AF”.

When she hits, “Get your booty on the floor tonight”, the place explodes into thunderous cheer.

In her spare time, she carefully yells into a mirror to perfect her craft as a competitive arguer.

She lives in Hebron with a bunch of dudes and a cat, Mr. Wigglepuss, who, predictably, is also a dude.

After lettering for the mighty Indians of Manchester High for 7 years, Dan took his talents to the beaches of Misquamicut where he played in the Drunken Clam league under the great Nailz Johnson.

He adds a nice punch of offense to the 2nd place Ram-Rodders.

When not in action, you can find Dan at the Hungry Tiger. 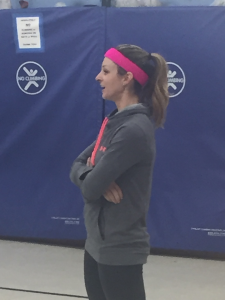 Dana Plourde captains the Smashers and joins the Hebron Harvest League after spending time down in the farm system with the Andover Yard Gnomes.
She has made her presence felt by those that seek to challenge her. She has enforced a strict dress code, requiring all players to wear pink headbands at work the days of games if they want any playing time.

Her dictatorial approach has paid dividends as they sit atop the league all by themselves.

When not in action, you can find Dana at local restaurants asking the owners to name a sandwich after her.

She lives in Hebron with her husband and 14 cats, all of whom have pink headbands.

When assembling the Hebron Harvest League, Chairman Butch Hammerclaw, said, “If we don’t get Rob, we might as well just make it a crappy rec league”.
Rob signed on after insisting the league buy him a new X-Wing Star Fighter.

Testing his Jedi skills, Rob has been able to find his way onto educational and sports boards since arriving in Hebron.

In his spare time, Rob rides snowmobiles over unfrozen ponds.

He lives at home with his loving spouse, two children and an aromatherapy oil infuser.
The Schadtle’s anticipate welcoming in a brand new Luke Skywalker refrigerator this spring.

Joey joined Kiss My Ace in 2018, leaving his former team, The Empire Spikes Back out of the Florida Sun League after a lengthy and bitter contract dispute.
He brings his Sun League leading 89% dig rate to the struggling Aces in hopes of a mid-season turn around.

In his free time, Joey helps the elderly with their grocery shopping and volunteers at the local dog shelter as an animal whisperer.

He lives in Hebron with his pet rock, Misty and two show ponies, Argento and Scrotto

While leading a trophy hunt in the African wilderness in 2001, Katie Gower noticed that one of the sons of the primary guest, Larry Livermore, who had grown tired of shooting helpless and prized animals, had also brought along a volleyball.

Katie and young Lawrence played for hours, perfecting their bump, set and smash routine, even setting up a show that they performed on an elephant they had shot earlier in the day.
Katie traded in her trophy kills for kills on the court that bring trophies. She established the league that continues to be the crown jewel of volleyball on the African continent.

Katie’s transition was a hard one to weather for the Hebron Harvest League. Katie’s talents are unmatched, but the optics of her towering over the countless expired trophy animals, was not great.
For her part, Katie sits outside the Gazebo at Burnt Hill Park from 9-11 every Saturday morning and will pet your animal.

She lives in Hebron with her husband, 2 children and no pets. She’s not allowed to have pets.

Cheryl joined the league this year because, frankly, she wouldn’t stop yelling at us. Little did we know that the yelling didn’t stop once she was on the team.
Some of her favorite and most often used lines are, ‘Try hitting it IN bounds, you moron!” or ‘You guys should play in a toddler league’. Unfortunately, she’s always talking to her own team.

After a long stint in the ‘Misfit Toys’ League out of Kenosha, WI, Cheryl moved to Connecticut to join the Hebron Harvest League so she could also play Dominoes at Mohegan Sun on the weekends and weeknights and holidays and special occasions.

Cheryl does have great skills from the serve and midstripe area, a benefit Kiss My Ace has not seemed to put together into a win this year.

In her spare time, Cheryl enjoys long walks on the beach and those smutty romance novels with musclebound men in kilts on the cover. – You know the ones.
She lives in Hebron with her son and two cats, Bret Michaels and Vince Neil. 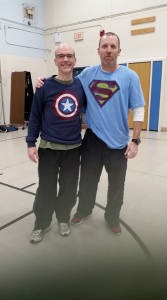 After a long criminal career as a teen, little Richy’s final straw came when he slapped a guy in line at Dunkin’ Donuts for taking the last six Boston Cream donuts when all he wanted was one.
To this day, Rich will insist he’d do it all over again.

Enter the Saint. Rob Sullivan, who had just been kicked out of the seminary for secretly dating a local babe, needed his penance with the big guy, so BB/BS was a great start.
Rob and Rich spent the next 15 years developing their relationship through baseball, camping trips and paint nights. When they heard about Volleyball, Rich said, “F*#k Yeah!
Rob, while more refined, has over the years, picked up a few bad habits, said, “MotherF*%cker, yeah!”

Penance is big with these two, although they insist they offer no forgiveness for the sin of smashing winners in the faces of opposing players. That, they say, is their divine right.

In their spare time Robby and Richy make forts and dress up at superheroes. 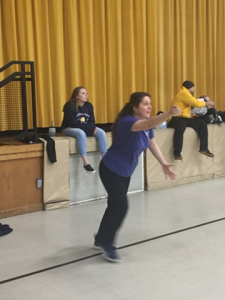 Tanya Miner, who once was a rapper under the non-de-plume of “T-Money Love”, who dropped such hits as, “F*ck the mall police”, and “Barbie’s a skank”, joined Kiss My Ace in 2018 because it was the team that was closest to using a swear in their name.

Tanya adds firm direction on the court for her fellow teammates, occasionally constructively, but mostly in a very demeaning way.
Joey Coletti once said, after being yelled at and berated by Tanya for not diving for a ball said, “This is what it must be like to be married”.

Despite her tough love approach, Tanya does add great value to the Ace’s arsenal on the court. Not enough to drum up a win, but nonetheless.
She attributes the recent struggles to everyone on the team except her. In a recent behind the scenes interview, Tanya said, “We beat most of these bums at softball last year, so it doesn’t surprise me that they have no idea how to win”. Miner was fined for these comments but later said, “No one f’s with T-Money’.

In her spare time, Tanya like longs strolls on the beach and geocaching. Well, actually she likes to go geocaching sites and removing the rocks and throwing them deep into the woods.

She’s a real peach, and if you’re on Tinder, swipe right for @TMoneyMiner 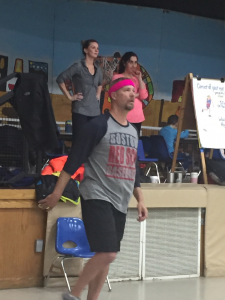 Skip has been quite the delight and addition to the Hebron Volleyball league. He has insisted from the beginning that he comes out through the fog machine to the sounds of Motley Crue’s , ‘Shout at the Devil’.
If that’s not enough, he has refused to play unless we supply him with his favorite Fig Newtons before the game.

Skip’s happiest moment in life was when he made it on Sportscenter for blocking a spike attempt by former Hebron Volleyball standout, Manute Bol. It was quite the moment.

In his spare time, Skip McChip can be found drinking margarita’s and on the prowl for senorita’s.

He lives in Avon with his three wives and 4 guard dogs, Bruiser, Brutus, Popeye, and Big Johnson.