The Victory at Vets.

The Smokin’ Bases topped the Ballsmackers 8-7 that showcased a revived Ballsmacker team that lead the whole game except for the only time that matters.

DJ Vinny C of Hebron Volleyball fame, delivered the knockout and walkoff blow to seal it for the Bases, who improve to 2-0. Carri-Ann Bell made her season debut despite publicly showing her affection for her hockey and baseball family last month with no mention of her softball family. This certainly created tension on the field, but Mighty Mo Sullivan was able to diffuse the situation with her calming presence and usual popsicle jokes. She also masterfully set the positions to bring the victory home for the Bases.

For the Ballsmackers, we finally saw the appearance of “Sexy” Shawn Brainard who made an immediate impact.

3rd base coach: Sent his player to third despite the 3rd baseman already having the ball.

When reached for comment, the Plourdes, Cawley’s, Schadtle’s and Gower’s said in unison, “Garbage”.

Zach Bell found the shortstop’s glove with great regularity last night. Autumn Bell made him walk home after he started the double play after she had reached safely. “If anyone picks him up on the way home, it’s your ass” said the charming Ballsmacker.

“Everything that rises must converge”

The S.O.F.T. Ballers got on the Thunder Buddies early and often, breaking out to a 13-1 lead that manager Jarrid Clifton said was like a watching competitive ballroom dancing. “Beautiful, it was majestic”, he said.

But just as all things, say breakout sales at your local pet store for example, all great things must come to an end.

The Thunder Buddies would not be turned away. After a sluggish start capped off by Justin “Snoop Bousquet’s” refusal to dive for a ball, citing “a contract year”, Hebron’s best looking softball manager and the 3,678th runner-up to this seasons American Idol, Ravishing Ryan Price took his pound of flesh from Bousquet that lit a fire under the Buddies. Moments later, Jim “Mookie” Knox make an amazing diving catch and looked over to Bousquet and said, “That’s how you do it, you baby”.

Christine Gee, straight from her hitting lesson, played the field amazingly last night. Every time she threw someone out, she’d say, “That’s what I’d do for a Klondike bar”. Weird group. Danielle Brancard made a great catch after missing almost the same one a pitch before. She later admitted to be thinking about the Klondike bar.

Ryan Tyrol catapulted the Buddies to success with his double that came fast on the heels of the defensive web gems and solidified the psyche of a team that was not to be denied.

Also not to be denied, is Rockin’ Rob Mangiafico, who continues his perfect season with three more hits.Dennis Guyette was an integral part to the Buddies win, whose towering pop fly is rumored to have started the lightning storm.Jenn “Five Fingers” Guyette continues to steal gloves before, during, and after the game surely added to her collection.The S.O.F.T. Ballers have a lot to be proud of. They did plenty well. Tanya Miner tossed a gritty game in defeat. Gritty because she had been hiking Gay City and had forgotten to shower before the game.

Cheryl “The Mouth” Little, hit well and was surprisingly quiet throughout the game. No word on what the hospital dr’s said is wrong with her. Joey “The Stallion” Coletti, hit nicely and played solid in the field, except for when he stuffed a handful of grass in Eric Pinkham’s shorts. Stacy Chism, fresh off her reinstatement for PED’s bombed a ball into the outfield to plate a couple. The blood test is currently pending. 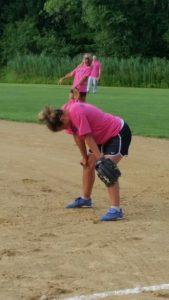 If one picture could sum up tonight’s performance by team headband CrossFit Ballsmackers, it’s this one.

The Thunder Buddies relentless off season scouting and acquisition program headed up by Enrico “Art of the Deal” Pallasto paid huge dividends. Karen “The Krusher” Esposito bombed a triple over the head of the left fielder who Karen said, “Showed me no goddamn respect, so I showed her the same”. Josh, her husband, and fellow Thunder Buddy, calmed her down as she threw obscenities at the children on the opposing side. Interesting pair.

Erin “The Glove” Bussiere was an off season acquisition that shored up some deficiencies from last year.

In a continuing theme, the husband and wife combo of Dennis and Jenn Guyette added some much appreciated great play. After the game, sideline reporter Ashley Nuddy asked Dennis what he thought about the Buddies chances this year. “I’m not sure. We have some work ahead of us, but I suppose if every team sucks that bad, we’ll be ok”.

Ida Bomb Price spared the woods a new tenant tonight, but promised to end that on Thursday. I’m happy to report that “Shut up, Ryan” was not heard tonight.

RYNO Tyrol has effectively been banned from calling out position assignments until further notice.

For the Ballsmackers, all was not lost this evening. “The guy known as Skip” who was voted team MVP in the winter volleyball league made an immediate impact by legging out a triple as if he were Rickey Henderson. On Sunday, Dana and Trish told John Axelman, ESPN the Ocho reporter that, “The game against the Thunder weenies is going to be at the beach”, so this was a tough defeat. Jay Plourde was lead off in handcuffs. Again. 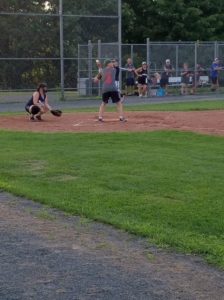 It’s clear that this isn’t your mothers Smokin’ Bases team. After losing half his team to the newly formed Ballsmackers, Rob Schadtle worked tirelessly to assemble a 2018 team that would instill fear into the other teams and their kids. Adam “Bomb” Gower was a nice addition to compliment the scrappy veterans that who have the Hebron Cup. Rob “Forest” Sullivan tossed some innings from the bump and made an impossible catch and kept running and ruh-ning and ruh-ning. Mo Sullivan, the Mr. Fuji of softball, engineered a near flawless battle plan to fly the W tonight.

The S.O.F.T. Ballers played well in defeat, though.

Jason “The Jewel” Gentile, by his own admission, was “Fantastic”. “If everyone was half as much talent as me, we’d never make an out”. Tanya Miner, according to game reporter, Tanya Miner, was, “nothing short of magical”. Cheryl Miller Little was loud and Jarrid “The Intimidator” Clifton was caught on video yelling at himself for hitting a pop fly. Joey “The Viper” Coletti used his new bat to help the ballers. Bryan Luca struck out. In softball. Slow pitch softball.

The 1-0 Smokin’ Bases battle the 1-0 Thunder Buddies on Thursday.
The 0-1 Ballers get back to work on Sunday against the 0-0 Hebron Hillbillies.